When a voice can take us through an experience that changes the rhythm of our breathing, we know we have been touched by musical grace. Enter Rhian Ayanna... A classical education, decorated with opera, jazz, soul and musical theater backgrounds, is merely a drop in a deep blue bucket for this undeniably gifted chanteuse. Among her many accomplishments, she received honorable mention in the John Lennon Songwriting Competition for her composition “Time” off her self-titled debut album which quickly established her as a talent to watch.

Rhian has a unique ability to transpose her environments, her cultures and her choices into profound lyrical arrangements that reflect an awareness of a universal experience. Born in New York and reared in Trinidad, Rhian was destined to breathe notes filled with diversity, warmth and spice. The same voice that has journeyed through Gospel and Jazz realms can ease into Caribbean rhythms mixed with urban flavors. Much like a chameleon, Rhian is able to take on the colors of the music that surround her, becoming one with sound and vibration. With qualities such as these, it is no wonder that her experiences include performances at the Blue Note Jazz Club, a vocal appearance on RH Factor’s Grammy-nominated Strength EP, background vocal performances with Ladybug Mecca of Digable Planets and a television performance with mega-producer David Foster on NBC’s Star Tomorrow.

Still, the most extraordinary quality that Rhian possesses is not her notable accomplishments, not the fact that she writes and arranges her own songs . . . it is her power to reach within each listener and touch the part that longs to fly. She is not afraid to plunge into the depths of human emotion and she does it naturally. She is a performer who undoubtedly shifts the paradigm for today’s artist.

“Rise On” is the first single from Rhian Ayanna’s second US album, due to be released in early 2021. 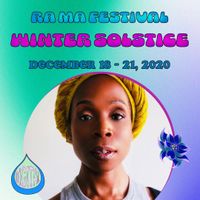 Rhian Ayanna will be presenting virtually with @gurujagat, @ramainstitute and a global community of artists, change-makers, creators, performers, meditators and thought-leaders partying to change the vibration of the future.

A 4-day astrological portal of LIVE non-stop, all day and all night interactive conscious art, music, performance, and meditation.

Available on these streaming services